Part 4: The Last Days: "The Saga of Tim Tebow, Prayer and Jesus"

Part 5: The Last Days: "The Explosive Secret of the Vine"

Get your family ready for Christmas and its deeper meaning. Join our Healthy Families Sabbath School class 10:30 AM. Sabbath Morning in Room 141. We will be showing and discussing the DVD study series, The Christmas Experience.

Thank-you to all who braved the weather on Sunday, November 14 to participate in the Village of Berrien Springs Shamrock Spruce-Up! 18 of the 24 volunteers who came out to show love on the move were part of the Pioneer team. Participants were out for around four hours, raking, blowing, and bagging leaves in yards all over Berrien Springs. It was a blessing for everyone involved!

And [Jesus] looked up and saw the rich putting their gifts into the treasury, and He saw also a certain poor widow putting in two mites. So He said, "Truly I say to you that this poor widow has put in more than all; for all these out of their abundance have put in offerings for God, but she out of her poverty put in all the livelihood that she had." Luke 21:1-4

Donny and Johnny were the youngest of 7 children. Their family wasn't blessed with an abundance of money, but there was more than enough love to go around.

One Christmas there was no money to buy presents, so each person in the family exchanged something they already had with someone else. Donny and Johnny were chosen to exchange gifts with each other. Neither boy had much, but Donny had a shiny, sliver flashlight that Johnny thought was pretty cool.

It was the only possession of real significance Donny had.

On Christmas morning when the gifts were exchanged, what do you suppose Donny had given to Johnny? That's right, it was his silver flashlight! Rather than just giving Johnny something that wasn't very valuable, he gave him the best that he had.

When we give our offerings to God let us remember that it isn’t the dollar amount that is of greatest importance. Rather, it is the sacrifice we make that renders our gift as valuable in Heaven’s sight. Today’s offering is for the Local Church Budget.

Andrews Academy Invites You to the Feast of Lights

Update: Andrews Academy will be presenting the 48th annual Feast of Lights program on Friday, December 10, 2021 at 7:00 PM. With the rise of COVID-19 cases our community and county, the 48th annual Feast of Lights program will be live streamed for our community. To provide enough physical distancing we are restricting the in-building audience to just a limited number of family members of participants. For many in our community the Feast of Lights is part of our cherished Christmas traditions, we are sorry that we have to make this last minute change. The community is invited to enjoy this spectacular night of music, Scripture, and drama, honoring the King of Kings. It will still be an evening of lights, bells, instruments, choral singing, congregational singing, shepherds, a Nativity scene, and the retelling of a glorious Christmas story. The program will speak to your hearts of His wondrous love.

You are also invited to an evening of popular Christmas music on Saturday, December 11, at 7:00 PM at the Howard Performing Arts Center on the campus of Andrews University. Join us as we bring in the holidays with a variety of well-known Christmas songs including a grand finale played by the combined musical groups.

Get in the Christmas spirit as the Andrews University Wind Symphony under the direction of Byron Graves performs its annual holiday concert on Saturday, December 4, at 8:00pm in the Howard Performing Arts Center! Along with classics like Joy to the World, Ding Dong Merrily on High, and Away in a Manger, we will present imaginative transformations of Jingle Bells and the Nutcracker Suite by Julie Giroux, music from Disney’s Frozen, and a mambo version of We Wish You a Merry Christmas. You won’t want to miss it! 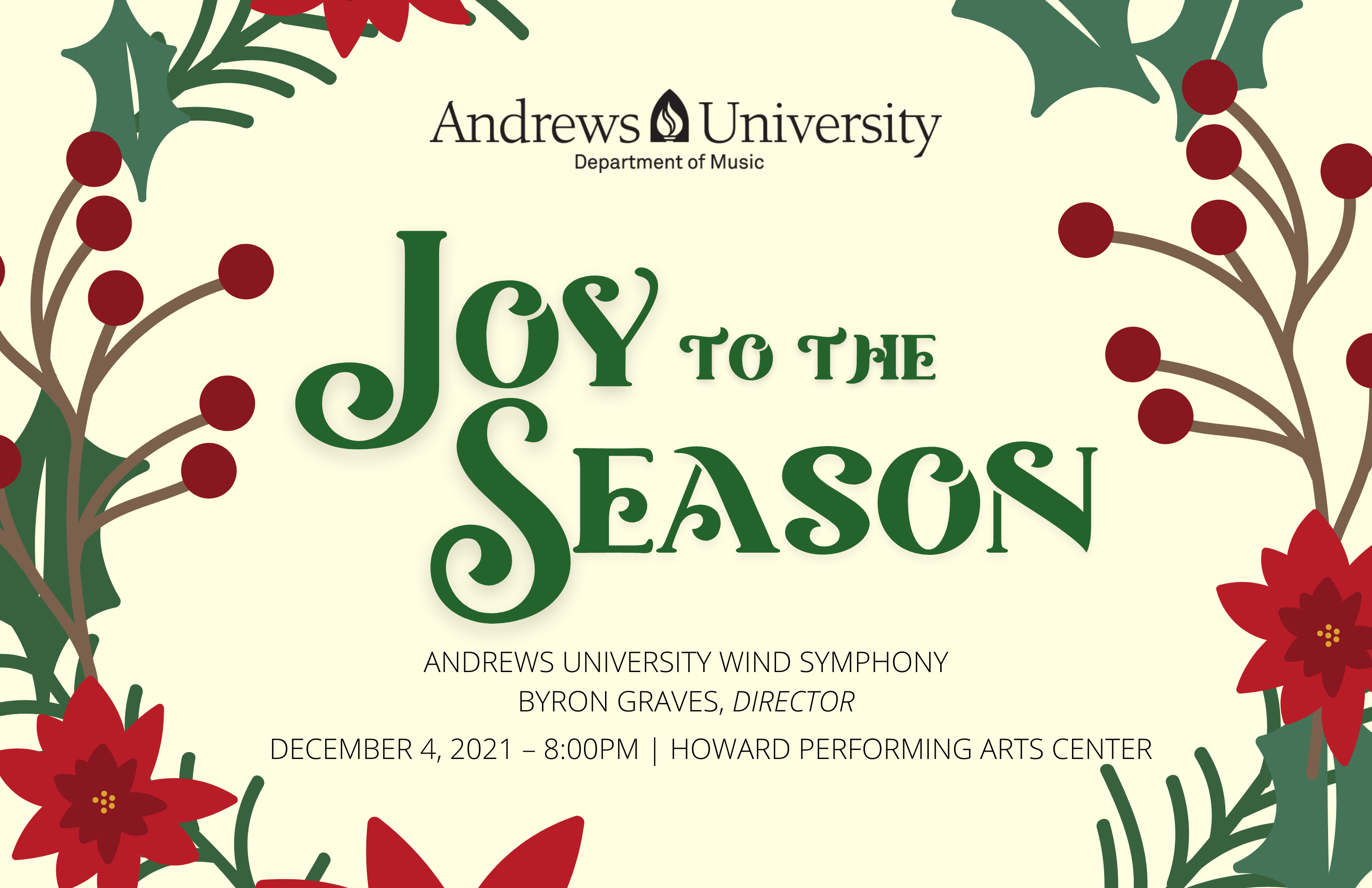 ASAP Ministries is looking for an effective communicator with good organizational skills and attention to detail, as well as marketing experience, including social media and proficiency in Microsoft Office Suite and Adobe InDesign/Photoshop.

If interested, please email your résumé, references, and cover letter to Pr. Robert Benjamin at robert.benjamin@asapministries.org. If you have any questions about this position, call Pr. Benjamin at 269-471-3026.

God's Hands 4 Kids is a ministry that grew out of a Grow Group and originated in 2013. It exists to support foster care, adoption, kinship placement and disadvantaged families serviced through Berrien County Department of Health and Human Services and other agencies. We provide a support group for foster, adoptive and kinship families. We also invite families who are interested in fostering, adopting or supporting these families to join us. Their next meeting is November 18. For more information visit GH4K.org and join their Facebook Group, where they share needs presented to them.

A Prayer for Veterans

O God, Father of military persons as well as civilians, on this Sabbath following Veterans’ Day, we pray for all those who have served in one of the branches of the Department of Defense-Air Force, Army, Coast Guard, Marines, and Navy, and have separated or retired. We realize that not all were God-loving or even God-fearing, but all were serving their country selflessly. Many have been very seriously wounded, some physically, some mentally-lifelong wounds. But, wounded or not we ask for them your bounteous grace and mercy-lifelong. Touch with generous and caring hearts those who have caring responsibilities, official and unofficial, to provide gracious and comprehensive care as Good Samaritans. Today, we also pray Your merciful care for all veterans, world-wide, through Jesus, Who has all authority in Heaven and Earth, till He comes again. Amen.

This Christmas season, Pioneer Women’s Ministries is delighted to share with you a Christmas Hymn Reflection each day through Christmas day. A daily email and/or a text will be sent to those who register. To register, text HYMNS to 269-281-2345.